Ride of the Month - Tanzania

This month we're going to catch the Great Migration, ride in the shadow of Mount Kilimanjaro, and meet the iconic Maasai…

“You know you are truly alive when you’re living among lions.”
- Karen Blixen, Out of Africa

Regretfully we can’t guarantee Robert Redford will be there, but we CAN give you our answer to Karen Blixen - tough, dynamic, very dashing on a horse, and great at getting things done, Swedish-born Joanna Westermark has made Tanzania her home.

She’s grabbed the buffalo by the horns in setting up her own venture, Kaskazi Safaris, named, somewhat appropriately, for a monsoon wind that sweeps in to the Indian Ocean from the North. 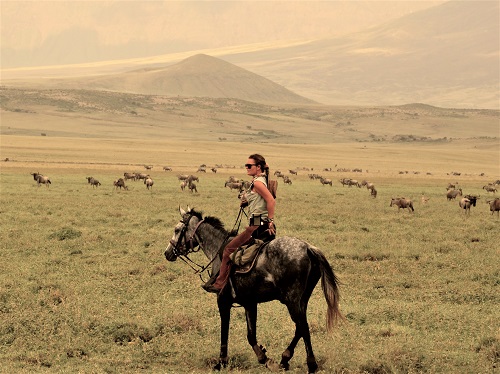 FASCINATING FACT: When it came to setting up her newest venture, a Serengeti safari which passes through Maasai grazing lands, Joanna went with her right hand men Marresso and Langetti, Maasai themselves, to put her case to around 300 hundred tribesmen who were all given their chance to speak (and did!). Impressively, she managed to persuade them and is now the first and only guide to lead riding safaris in the area.

“Don’t go to the plain without somebody to take the dust out of your eye.”
- Maasai proverb

Perhaps the most iconic of all African tribes, you’ll have a good chance of meeting the enigmatic Maasai on safari. Their traditions are well known but little understood, with jumping dances, the drinking of cow blood, body modification and shamanic healing still part of everyday life.

A man’s worth is judged by how many cattle and children he has, and the community’s nomadic lifestyle is dictated by moving their precious livestock to the best grazing. The culture is steeped in ceremony and ritual, much of it centred round the progression of a boy as he becomes a fully-fledged Moran, the notoriously fearsome warriors who protect the tribe. 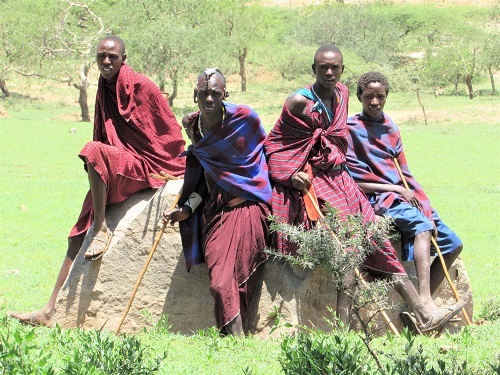 FASCINATING FACT: As guides, the Maasai are difficult to rival. Their eagle eyes and tracking skills seem, to us, almost superhuman. But then again, remember that a traditional rite of passage for young warriors was once to hunt and kill a fully grown male lion on the open plains, alone, and using only one spear and a small shield.

“Well may I ask what you expected to see out of a Torquay hotel bedroom window? Sydney Opera House perhaps? The Hanging Gardens of Babylon? Herds of wildebeest sweeping majestically across the plain...”
- Basil Fawlty, Fawlty Towers

Each year, around 1.5 million wildebeest travel a 1,800 mile circuit from the Serengeti, clockwise up to the Masai Mara, then back down again. Calves are born in a short timeframe on the southern plains of the Serengeti; Joanna’s Serengeti safaris are planned around this, and if the timing is right you’ll be riding right in the thick of it.

After a few weeks fattening up on the fresh grass, the vast herd sets off north to Kenya in search of fresh grazing, but around a quarter of a million will die before reaching the Mara - from thirst, hunger, exhaustion, drowning, or predation by the resident lions that follow their progress with interest. Those who make it enjoy a brief honeymoon in Kenya before the long trek back down south. And so it goes on, round and round, in a circle. The circle of life, one might say. 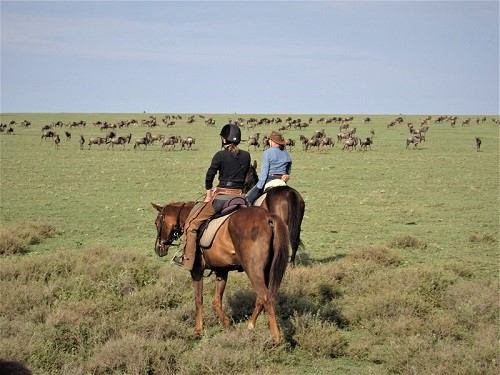 FASCINATING FACT: Each February / March, an estimated 8000 wildebeest calves are born - every day.

THE ROOF OF AFRICA

Atangaye na jua hujuwa - He who wanders around by day a lot, learns a lot
- Swahili proverb

Tanzanian safaris aren’t just about the Serengeti. Joanna’s rides cover a diverse swathe of northern Tanzania with Kilimanjaro towering beside you; the highest point in Africa provides a stunning backdrop, along with Mount Longido and Mount Meru.

Another route explores Natron and its vast salt and soda lake where temperatures can reach 60°C; with a pH of over 12 it’s not the most hospitable of environments, but it does provide refuge for the 2.5 lesser flamingos who depend on the lake as their one regular breeding ground, with the caustic environment forming a natural defence against predators. 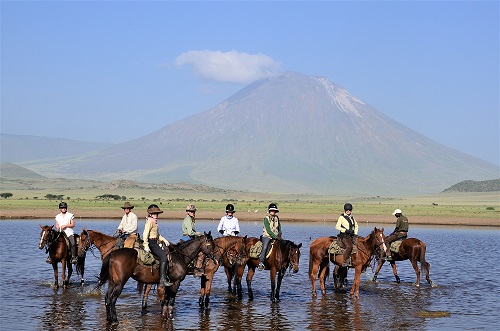 FASCINATING FACT: Local tribesmen believe that mountain dwarves (“Wakonyingo”) live in caves on the slopes of Kilimanjaro; thought to have oddly oversized heads, they prey upon those who bring negative spirits to the mountain. What’s more, there’s scientific evidence that pygmies once roamed there...